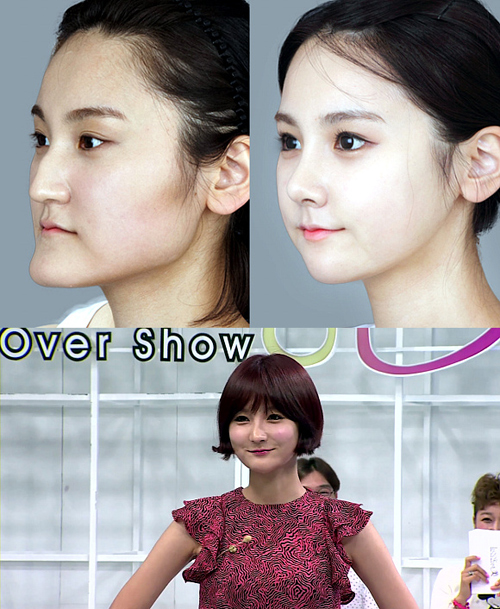 Hong Ji Yoon used to have a large and witch-like face. Her face was wide with an angular square jaw, protruding cheekbones, hooked nose, and lantern jaw which made her face even larger. The main character of the female channel GTV's "Byun Jung Soo's Look at me", episode broadcasted on the 28th, she became the center of attention for both the MC and audience. Her transformation from a long jaw image to a lovely face amazed everyone.Ms. Hong Ji Yoon already had pretty eyes, but due to her large and angular face she received much stress and always tried to cover her face with her hair. She got braces to improve her lantern jaw to little effect. She also experienced much hardship from those around her criticizing her looks. 3 months after surgery, Ms. Hong appeared much brighter, more confident, and was in the spotlight of the MC and panel. MC Byun Jung Soo remarked, "the only words I can say is that you are so beautiful." She was constantly amazed at the dramatically changed Ms. Hong, and could not take her eyes off of her. A member of the panel added some helpful words to Ms. Hong, "I hope you can be proud and live a more confident life!" Representative Park Wonjin of Wonjin Plastic Surgery Clinic (in which Ms. Hong got her surgery) remarked, "the reason that her lantern jaw remained after braces was because they only corrected her bite. After undergoing two jaw surgery to improve her lantern jaw, her set of teeth were corrected with braces again." Also, "as her cheekbones and square jaw developed they made her overall face appear larger, and so we performed facial contouring surgery. Nose surgery was performed to correct her hooked nose, and her outer eye corners were lowered to provide a much softer impression. In addition, through B lifting, her face became sleeker and much more lovely." Representative Park continued, "after two jaw surgery, her appearance was remarkably improved and her recovery was quick. We believe the patient is very satisfied with her natural appearing results. We hope that she can finish the rest of her university time with all smiles."

“With the best skill and aesthetic technique,
WONJIN Plastic Surgery Clinic will cheer you on your wonderful future”